In many countries nowadays, the use of diverse, various human-environmental abilities against single dimensional capabilities have been perceived as a necessity in order to offer comprehensive, sustainable development. One of the means to achieve this purpose is to study and implement tourism development programs at local, national, and international levels. The tourism industry entails significant potentials in historical, cultural, and environmental contexts, a part of which is tourism or exploiting geological and geomorphological potentials. The diversity and vastness of geological zones and geomorphological phenomena across Iran are fairly abundant; subsequently, in addition to the identification of such phenomena, conducting studies and drawing precise, systematic plans are steps toward regional and national development. The major purpose of this study is to evaluate the tourism potential of Uramanat region with focus on geomorphological forms and processes in line with regional development, the necessity of which during the current period is to conserve this inheritance followed by a proper operation in order to create jobs, increase incomes, and prevent population migration, especially in rural regions.

The tourism industry in Iran is an aspect that essentially requires planning and attention due to the country’s high natural, cultural, historical, and climate potentials which, as one of its significant and valuable strengths, could be exploited in line with sustainable development. This industry entails different forms and types which may vary given environmental and regional conditions. Today, paying attention to geomorphological and geological potentials as a branch of tourism (geotourism) have found a special place within the research conducted on this industry. The exploitation of ever-evolving and changing geomorphologic phenomena, forms, and processes that have brought about original, beautiful views for everyone to visit has witnessed a considerable growth during the past few decades; given the country’s vastness and high diversity in natural and human contexts, Iran is one of the most desirable, apt spots in the world.
The word “geomorphosite” was first introduced in 2001 by an Italian, M. Paniza, followed by extensive studies in the area by Dawling and Newsome (2009), Thomas Hows(2012), Reynard, Pralong(2001), Periera(2002) and etc. On the other hand, the word “geomorphotourism” was first presented in 2004 by an Iranian geomorphologist, Mohammad JafarZomorrodian at a symposium in London, which was then expanded through studies by Amri Kazemi(2000), Nekouei Sadri(2005), Farsani(2007), Maghsoudi(2010), Yamani(2012), and others.
Located on the west of Iran, the Uramanat region includes sections of counties including Paveh, Javanroud, Ravansar, Kamiyaran, Marivan, and Sarvabad. Given the high capacities and special potentials of this region such as the continuity of mountains and valleys, limestone caves, springs and mirages, rivers, lakes, etc. it has been selected for this study.

The present inquiry is an applied-developmental study conducted with the purpose of evaluating the tourism potential with respect to geomorphological contexts in line with the regional development of Uramanat region. The methods, tools, and techniques used to examine, analyze and collect the required data included the descriptive-analytical method as well as using Pralong and Periera’s models along with library studies and field observations. In the first step, library and document studies were investigated to collect descriptive data and information. Then, the collected data were analyzed using Pralong and Periera’s models which are specialized models regarding the subject of the study. The results of these models were ultimately aligned using field observations and examinations.
The two main criteria assessed and evaluated in Pralong’s method included tourism efficiency value and geomorphotouristic criterion; the former involved two grades including the efficiency level and efficiency quality level of geomorphosites and the latter involved four grades including the appearance, scientific, historical-cultural and socioeconomic grades of geomorphosites. Ultimately, their results are taken into account in average to indicate whether the intended potential exists or vice versa.

Studies conducted on the descriptive section and field examination of the region showed a high potential in the environmental dimension, particularly regarding geomorphological phenomenon. These findings were assessed using the grades mentioned in Pralong and Pereira’s models including scientific, cultural, economic, social, efficiency, management, appearance and aesthetic grades of a region. Employing these models shows that the Uramanat region is at a high rank in terms of aesthetics (Total average - 0.6), particularly in the natural and geomorphological dimensions. In terms of scientific (Total average - 0.5) and cultural (Total average - 0.7) dimensions, this region is above average. Nonetheless, it is at an undesirable level regarding the economic dimension (Total average - 0.5).
The tourism value of Uramanat in Pralong’s model which is obtained through the aesthetic, scientific, cultural, historical and economic indices, was discovered to involve an above-average score, i.e. 55%. Furthermore, in the average efficiency value, the index has been above average with 75%.
The geomorphologic grade of Uramanat region, the potential of which is assessed and evaluated from a score of 10, achieved an average of more than 8 points, a scientific grade of 4.5 out of 5.5, a complementary average grade of 3.6 out of 4.5, usage grade of almost 5 out of 6, protection grade of almost 2.5 out of 3, and finally, a management grade of above 7 out of 10.

The results obtained from analyzing both Pralong and Periera’s models demonstrate that this region is of high potentials in the majority of scientific, aesthetic, complementary, geomorphologic, etc. criterion and indices. However, in terms of management and protection aspects, the region involves low strengths and capacities due its limitations, absence of investments, and economic shortcomings. In other dimensions however, not only the region entails rich cultural, social, and historical indices, it also complements the natural, untouched environment of Uramanat.
As a result, given the high potential of this region (total average – 15.32) it is necessary to first indicate its apt spots followed by drawing a scientific, expert plan so as to initiate tourist attraction, increase occupation levels, prosper income cycles and ultimately, grow the economic level of the region. Considering the fact that the region has fairly remained original and natural, it is recommended to pay attention to the area in terms of protective and economic indices and to take necessary actions for education and advertisement by the local people and related authorities. 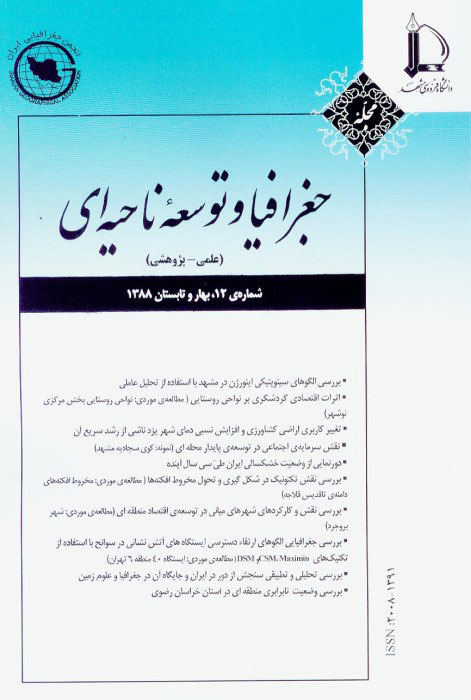